Richard Hight’s future seemed to hold little promise.  As a small town kid trying to tame the tornado in his mind called Dyslexia, easy answers were not available for this renowned author/artist/inspirational speaker.  As preceptors, we can appreciate differences such as these in our learners each time an experience ends and another begins. Being able to adapt to the challenges and opportunities to motivate each learner is a critical skill of anyone in teaching, including pharmacy preceptors. From an elementary student who seemed to have limited options to masterful motivator working with Fortune 500 companies, governors, and national leaders, Richard’s story sparkles with hope. Preceptors will leave feeling inspired and refreshed in the art of precepting. Don’t miss it!

About Our Opening Session Speaker 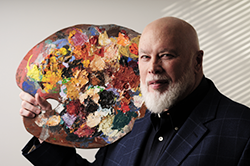 As a youth growing up in the Midwest and struggling with dyslexia, he realized quickly what a challenge school work could be and how cruel peers are at times. But with the help of his family and a few outstanding teachers, he learned to adapt to his uniqueness and through creative artistic expression, he even began to see his situation as a gift!

Richard knew even as a young child that art would be important in his life.

As an adult, he has thrilled many with his creations and inspirational speaking. Proliﬁc and adventuresome, his work is varied and far ﬂung: he has opened concerts for major recording artists, such as Amy Grant, Clint Black, The Oak Ridge Boys and many others. Richard has also appeared at over 50 major college and university events and on ABC, NBC, CBS, and Fox Networks. He has performed at public school assemblies, the Kentucky Derby Festival, Silver Dollar City, and many other major attractions and premiere events across the nation, including shows with the Blue Angels and the Thunderbirds. His work graces major corporations and museums.

The proud father of two, Richard says his children enrich his life. Daughter Averie, who has Down Syndrome, is a joy and Cole, who is a “terriﬁc son and an awesome brother,” sometimes travels and performs with Dad. “I feel my kids allow me to better connect with my audiences,” Richard declares. He may be right since he is invited to hundreds of schools, in addition to his other speaking commitments, each year.